I have been to weekly tafsir classes by Shaykh Mustafa Mahmoud al-Azhari in Masjid as-Syakirin, KLCC. I was introduced to Shaykh Mustafa by my friend (Yassir) who had known him in Houston,Texas.  The class just started on 30/8/14 and will be conducted every Saturday from 930-1130  am. So far, there are only less than 10 students in our class. Shaykh Mustafa just moved from Houston, Texas to Kuala Lumpur few months ago and he is not well known to Malaysian public.

Shaykh Mustafa Mahmoud, age 65 was born in Cairo in 1949. He is purely Azhar-trained scholar who received his primary/secondary/tertiary education in Al-Azhar, Egypt.  He completed his degree in 1974 and work as lecturer in Al-Azhar University from 1974-1979. Among his notable teachers in Al-Azhar :

In the year of 1979 to 1983, he was sent by al-Azhar to Islamic University in Islamabad, Pakistan. He taught Quran lessons including tafsir and Arabic language. In 1983, he returned to Egypt and continued his teaching profession until 1986. He was again sent abroad by al-Azhar for teaching, this time to Ghana, Africa until 1992.

Shaykh Mustafa spent another few years  in Cairo, Egypt before being sent to Texas, US in 1995. Unlike akistan and Ghana, he continued to stay in Texas, US for the next 19 years. He actively involved in da'wa and propagation of Islam in Houston, Texas. He was the Imam of Masjid Bilal, Houston and also Head of Ulama and Fatwa Council Committee of North America. Apart from that, he was the Vice President of NAIF (North America Imam Federation).

His tafsir class in Masjid As-Syakirin is currently commenting on the Juz 'Amma (Surah Naba). No specific tafsir are used, only the translation of the Holy Quran in English. Shaykh Mustafa is using some classical tafsir as his sources including Tafsir of Ibn Kathir, Zamakshari (Kasyaf), at-Tabari and Baydawi.

His classes are open to public. Kindly pm me if interested.
at Saturday, September 20, 2014 No comments: 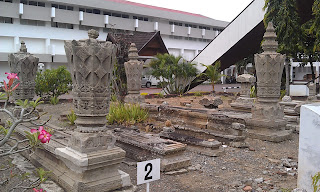 The Lawfulness of Muslim Revolutions

As protests and defiance spread in Muslim countries, questions are being asked as to whether such conduct is halal.

The best month of the year!

Freedom in Egypt after 30 years

Salute to the young Egyptians!

Planting the seed of freedom and justice in Tahrir Square
at Sunday, February 13, 2011 No comments:

Huge numbers of Southern Sudanese have been voting in a landmark referendum on independence from the north.
The week-long vote is widely expected to result in Africa's largest country being split in two.
Amid scenes of jubilation, south Sudanese leader Salva Kiir said: "This is an historic moment the people of Southern Sudan have been waiting for."
The poll was agreed as part of the 2005 peace deal which ended the two-decade north-south civil war.
The leaders of the mainly Muslim north have promised to allow the potential new country, where most people are Christian or follow traditional religions, to secede peacefully.
The BBC's Will Ross in Southern Sudan says he has not met a single person who says they will vote in favour of continued unity with the north.
But President Omar al-Bashir has warned an independent south would face instability.

Long lines of people began waiting to vote well before dawn, as Southern Sudanese turned out in droves to decide whether or not to seek independence.
"We watched the light of the sun rise up this morning - the dawn of a new chapter for the south," said Paul Nduru, a teacher who had been waiting from midnight.
There was a carnival atmosphere, with people waving the Southern flag, as dancers and drummers beat out tunes.
Red and white tape marked out the lines for the queues, with celebratory party balloons tied alongside.
Many people queued up to vote long before polls opened.
"My vote is for my mother and father, and my brothers and sisters who were murdered in the war," Abraham Parrying told the BBC as he waited to vote in the southern capital, Juba.
"I also vote for my children-to-be - if God grants me that - so that they can grow up in a south Sudan that is free and is at peace."
Another voter, 36-year-old soldier Maxine About, said he had "seen the inside of war so we have to stop the war now".
"We are very happy the Arabs are going away," he told the Associated Press.
Voting had been due to end at 1700 local time (1400 GMT) but polling was extended in many Juba polling stations because of the long queues.
Southern Sudan has high levels of illiteracy so voters are faced with two symbols on the ballot paper - a single hand for independence or two clasped hands to remain one country.
On Saturday, Mr Kiir said the referendum was "not the end of the journey but rather the beginning of a new one".
He was speaking in Juba alongside US Senator John Kerry, who has been in talks with both northern and southern leaders attempting to smooth the voting process.
Mr Kiir, who was the first to cast his ballot, urged people to "be patient", in case they were not able to vote on the first day of polling.
Veronica De Keyes, head of the the European Union observer team in Juba, said voting appeared to have started well.
"What I observed this morning was very moving in the sense that you can feel it, in the crowd, the expectation of the people is important," she said.
"It's very, very well organised. People are queuing very quietly so far and I hope it reflects what is happening in the country today."
However, the run-up to the vote was marred by an attack by rebels on Southern Sudan's military in the oil-rich Unity state.
Col Philip Auger, a military spokesman, told the Associated Press on Saturday that his troops had retaliated and killed four of the rebels.
UN officials confirmed that they had received reports of an attack in the area, but did not say which side had suffered the fatalities.
There are also reports of clashes between southerners and Arab nomads over grazing rights for their cattle in the disputed oil-rich region of Abyei, long seen as a potential flashpoint which could trigger wider violence.
It was due to hold a separate referendum at the same time on whether to join north or south Sudan but this has been postponed indefinitely as the two sides cannot agree on who is eligible to vote there.
EU-style bloc?
In an interview with the Arabic news channel al-Jazeera, Mr Bashir said he understood why many southerners wanted independence, but he expressed concern at how the new nation would cope.
"The south suffers from many problems," he said.
"It's been at war since 1959. The south does not have the ability to provide for its citizens or create a state or authority."
Mr Bashir said southerners living in the north would not be allowed dual citizenship, and floated the idea of the two nations joining in an EU-style bloc.
He also warned that if southerners seized Abyei for themselves, it could lead to war.
Analysts say Mr Bashir is under intense pressure from northern politicians, who fear that secession of the south may lead to a further splintering of the country, in particular the western region of Darfur which has faced its own rebellion since 2003.
North and south Sudan have suffered decades of conflict driven by religious and ethnic divides.
Southern Sudan is one of the least developed areas in the world and many of its people have have long complained of mistreatment at the hands of the Khartoum government.
Earlier this week the official in charge of the referendum commission, Chan Rene Madut, said the region was attempting "something that has never happened".
"Nobody ever bothered to ask the people of Southern Sudan as to what their destiny should be," he said.
Turnout in the referendum will be important, as the 2005 peace agreement stipulates that for the vote to be valid, 60% of the 3.8 million registered voters must take part.
The official result is not due to be announced for at least four weeks, partly because of the logistical difficulties gathering the ballot papers from across a region the size of France and Germany which has no paved roads linking its towns and cities.