The Many Blessings of the Ten Days of Dhul Hijja

The Many Blessings of the Ten Days of Dhul Hijja
at Sunday, November 07, 2010 No comments:

On Hajj and The Two Sanctuaries

We'll be welcoming the month of Zulhijjah, all praise to ALlah!

Of course when we mentioned the blessed month, we'll always remember the ibada of Hajj (major pilgrimage) and the two sacred land, Makkah and Tayba (Madinah). I watched few programmes on RTM about pilgrimage this year. I hope I can be one of the selected few people that are honored to be the guest of ALlah, visiting His sacred sanctuaries.

Last year, somebody told me about 'Hajj' Medical team send by KKM to work in Makkah during hajj season. I filled the form, but never return it back. What a mistake! One of my close friend was selected to go this year!

For all future 'Haji' and 'Hajah', I would like wish them well and may ALlah SWT accepted your Hajj (mabrur) and may all of you return in good health with increased iman and taqwa.

Please remember that Makkah and Madinah are not like ordinary town or city or any land in this universe. They are not owned by anybody except Allah SWT. Some scholars advise us to treat the two sanctuaries like our mother. Love and respect the land like the Prophet did.

Once, Ottoman Empire ruled over Arabia. The great Sultan Selim I annexed the Memluks of Egypt and automatically, he became the ruler of Haramayn. Selim I did not take control of Makkah and Madinah by force. After the Memluks defeat, Sharif Barakat, the governor of Makkah and a vassal of Memluks sultan expressed his allegiance to Selim I. He sent his son, Abu Numay to deliver keys of Makkah and Madinah, as well as the sacred relics, belonging to the Prophet Muhammad (peace and blessing be upon him!) to the pious sultan.

Abu Numay was welcomed ceremoniously in Cairo on Friday, July 3, 1517. Three days later Sultan Selim received him personally. The governor of Makkah, Sharif Barakat was allowed to keep his post and the sultan honoured him by presenting him with a valuable robe. Even though Hijaz became a province of Ottoman state, its flag was not flown over the fortress at Makkah and Madinah, out of respect for Ka'ba and the Prophet. Centuries later, the Ottoman flag was flown in the two cities for diplomatic purposes; in Madinah during the reign of Sultan Abdul Aziz and in Makkah during the reign of Sultan Abdul Hamid II. 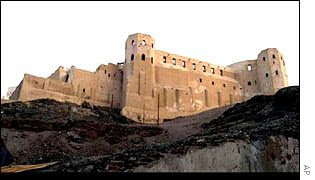 The 220-year old al-Ajyad Fottress built by the Ottoman to defend Makkah, demolished by Saudi government in 2002

The Turks continued to show love and reverence to the two cities. Hijaz was continued to be ruled by commanders from Ahl-Bayt families, but they were appointed in Istanbul. An officer was sent from the Ottoman capital to help administer the province but they were called 'muhafiz' (guard) rather than governors.

So, what we can understand now is;

During the First World War, with the threat from British and the rise of Wahabism, the Ottoman felt that they were unable to defend the Holy Sanctuaries. Decision was made to evacuate the city of Makkah and Madinah. For centuries, the Sultans and their royal families from Istanbul had been sending gifts for the two Holy Mosques in Hijaz. To prevent loss and damage (and looting), the relics were all transferred to Istanbul, now safe in the Chamber of Sacred Relics (Hirka-i Saadet Dairesi) in Topkapi Palace.

Perhaps we can feel and sense the love and reverence showed by the Ottoman Turks that time regarding the two cities. One of the lieutenant of the Ottoman army, Idris Sabri who was involved in the evacuation process wrote a beatiful poem, reflecting the feelings of the soldiers defending the cities.


You Are Our Master in Both World

You were a ruler; we came under your command
You are our king; promised from eternity
We were just a few, we have realized our goal with you
You are our Sultan in both worlds

We have forgotten our past kings
You are the pupil of our eyes
Forgive us our mistake, o intercessor
For the sake of our thousand-year strive

We have transgressed much, no good deeds we have
We have become spoiled, counting on your nearness
We are rich at heart but not covetous
A morsel for your intercession would suffice for us

Almost no one will listen to, alas!
Our wish so pure
In spite of your illiteracy, O Messenger of God
You are the only one to read our heart


Rosewater flasks have dried
Our tears haven't stopped; mercy!
The cinders of incense burners have cooled
Hearts are burning with your love

No poets of ours like Labid, or Hassan
And no poem do we have like Burda or Mu'allaqa
Except for history written,
By the Ottomans with rubies in red.

Cannot live without you, the children of Ertugrul
Turks will give up their lives but not the beloved
We are eternally servants of Haramayn
Even if we die, our souls will guard your tomb!

(From The Book of Sacred Trust)


May all of us have the same love and feelings for the Prophet and for our Holy cities like what shown by our Ottoman brothers hundred years ago.
at Friday, November 05, 2010 No comments: