At last, he is back from Istanbul!
Here is his programme in Dublin:

Abdal Hakim Murad graduated from Cambridge University with a double-first in Arabic in 1983. He then lived in Cairo for three years, studying Islam under traditional teachers at Al-Azhar, one of the oldest universities in the world. He went on to reside for three years in Jeddah, where he administered a commercial translation office and maintained close contact with Habib Ahmad Mashhur al-Haddad and other ulama from Hadramaut, Yemen.

In 1989, Shaikh Abdal Hakim returned to England and spent two years at the University of London learning Turkish and Farsi. Since 1992 he has been a doctoral student at Oxford University, specializing in the religious life of the early Ottoman Empire. He is currently Secretary of the Muslim Academic Trust (London) and Director of the Sunna Project at the Centre of Middle Eastern Studies at Cambridge University, which issues the first-ever scholarly Arabic editions of the major Hadith collections.

Shaikh Abdal Hakim is the translator of a number of works, including two volumes from Imam al-Ghazali's Ihya Ulum al-Din. He gives durus and halaqas from time to time and taught the works of Imam al-Ghazali at the Winter 1995 Deen Intensive Program in New Haven, CT. He appears frequently on BBC Radio and writes occasionally for a number of publications, including The Independent; Q-News International, Britain's premier Muslim Magazine; and Seasons, the semiacademic journal of Zaytuna Institute.
at Friday, November 17, 2006 2 comments: 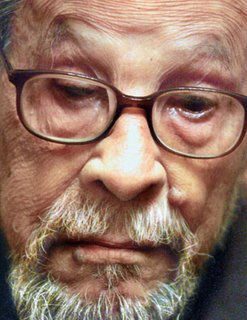 “My talk…comes in a language unknown to many of you but [that language] is the real winner of the prize. It is, therefore, appropriate that its melodies should float for the first time into your oasis of culture and civilization. I have great hopes that this will not be the last time, either, and that literary writers of my nation will have the pleasure of sitting with full merit among your international writers, who have spread the fragrance of joy and wisdom in this grief-ridden world of ours.

“I was told by a foreign correspondent in Cairo that the moment my name was mentioned in connection with the prize, silence fell, and many wondered who I was. Permit me, then, to present myself in as objective a manner as is humanly possible. I am the son of two civilizations that at a certain age in history formed a happy marriage. The first of these, 7000 years old, is the pharaonic civilization; the second, 1400 years old, is the Islamic one…. As for Islamic civilization, I will not talk about its call for the establishment of a union of all humankind under the guardianship of the Creator, based on freedom, equality and forgiveness….

“I will, instead, introduce that civilization in a moving, dramatic situation summarizing one of its most conspicuous traits. In one victorious battle against Byzantium it gave back its prisoners of war in return for a number of books of the ancient Greek heritage in philosophy, medicine and mathematics. This is a testimony of value for the human spirit in its demand for knowledge, even though the demander was a believer in God and what was demanded was the fruit of a pagan civilization.

“Ladies and Gentlemen, you may be wondering: This man coming from the Third World, how did he find the peace of mind to write stories? … Fortunately, art is generous and sympathetic. In the same way that it dwells with the happy ones it does not desert the wretched. It offers both alike the convenient means for expressing what swells up in their bosom.

“In this decisive moment in the history of civilization it is inconceivable and unacceptable that the moans of Mankind should die out in the void. There is no doubt that Mankind has at last come of age, and our era carries the expectations of entente…. The human mind now assumes the task of eliminating all causes of destruction and annihilation. And just as scientists exert themselves to cleanse the environment of industrial pollution, intellectuals ought to exert themselves to cleanse humanity of moral pollution. It is both our right and our duty to demand of the great leaders in the civilized countries, as well as of their economists, to effect a real leap that would place them in the focus of the age.

“In the olden times every leader worked for the good of his own nation alone. The others were considered adversaries, or subjects of exploitation…. Today, this view needs to be changed from its very source. Today the greatness of a civilized leader ought to be measured by the universality of his vision and his sense of responsibility toward all humankind. The developed world and the Third World are but one family. Each human being bears responsibility toward it to the degree that he has obtained knowledge, wisdom and civilization. I would not be exceeding the limits of my duty if I told [the leaders] in the name of the Third World: Be not spectators to our miseries…. We have had enough of words. Now is the time for action.”

Email ThisBlogThis!Share to TwitterShare to FacebookShare to Pinterest
Labels: General

After few months, those who were 'crippled' from attending DID II can now download and listen to the lecture by our teacher, Ustaz Mohammad Fauzi Hadrami. The lectures available are on Syafi'i Fiqh, Tasawwuf and Islamic Parenting.The corpora used were:

Email ThisBlogThis!Share to TwitterShare to FacebookShare to Pinterest
Labels: Event 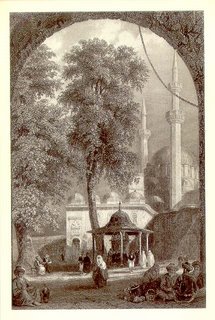 Sidi Abdal Hakim Murad once again wrote about his experience in Istanbul during Ramadan. Ramadan has left but the memories were commemorated in this wonderful piece.I just couldn't wait for my next ziarah to Istanbul.Ahmet, Sekdas and Celaladdin are waiting for me in Turkey.May Allah bless my trip in December and make me pass my exams!!

"Sabah prayer at the mosque of Eyüp is the most popular worship experience in the city; but arrive even at two in the morning on the 27th, and you will find it hard to squeeze beyond the leather curtains into the mosque interior. Here, more than anywhere else in the City, the Turks are feasting, and feasting again, on the Qur’an."


"Like a benign watchful presence, behind the five-hundred year old plane tree planted by the Conqueror’s own hand in the mosque court, lies the grave of the Companion Abu Ayyub al-Ansari, which, of the hundreds of active pilgrimage sites in the City, remains the greatest magnet for visitors. The space is ablaze with a turquoise glow, supplied by the Iznik tiles, which are among the most precious ceramic masterpieces in the world. Close beside it is the I‘tikaf chamber built for Princess Adile, who spent her Ramadans here a century ago, before being buried among the royal tombs nearby. Outside lie the graves of warlike pashas, sayyids, and ulema, including Ebussuud Efendi, the great tafsir scholar, and reviver of the Shari‘a in the time of Sultan Suleyman. Here too are the sainted ladies, and then great madrasas and tekkes, beyond the stone stairs where a new Sultan, visiting the mosque for his coronation, would descend from his horse, to walk the remainder of Enthronement Road humbly on foot. In his palace, the Sultan alone could ride; at Eyüp, he too was required to dismount."

"As Urdu-speakers well know, prayers in a language where everything happens before the verb have tremendous dramatic impact: ‘And our sins, in this and earlier months, against You and other members of our nation, Our Lord, forgive! And the affairs of the Muslims here and in the world, Our Lord, set right! And to the soul of Sultan Ahmet, Our Lord, grant rest!’"