Yet it has fallen, fallen forever ...

I'm reading a book that I bought almost a year ago. As you can see from the old, classic photo above, it's all about a Caucasian warrior who lived in the 18th century. Imam Shamil Daghestani, a Muslim scholar, a Sufi, saint and the Shaykh of Naqshabandi Tariqa of Caucasus who promulgated Shari'ah and eradicated Jahili customs from Daghestan. Apart from that, he yielded his sword against Russian bayonets.

Reading the book by Muhammad Hamid is just like reading an epic story .An epic story of faith in God and a legacy that every Muslims cherish, to be retold from generation to generation. It is enough to say that the Sufi movement, especially in Caucasus post-Ottoman period in the eighteenth century was not a Muslim cult that busied themselves merely chanting their zikr or awrad. Their struggle, refusing to concede and kowtow to slavery is indeed worth reading. A great book, written to tell us a great story of Muslims struggle in Caucasus.

Spending two, three days on this book is way much better than attending BTN course, isn't it? 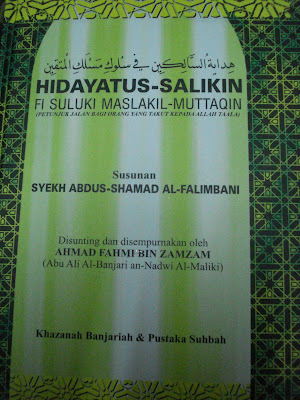 'Bai'ah' according to Islamic jurisprudence

THE current debate over oath-taking and its combination with divorce and pledge of political allegiance (bai'ah) has caused concern among Muslims to know Islam's own viewpoint on the issue.

The facts remain unclear but continued media coverage of the "oath of loyalty" linked to Pas representatives to divorce their wives (talak tiga) if they jump or quit the party has invoked public disapproval of this manner of oath-taking and its negative impact on the sanctity of marriage.

This is also a reliable indicator of Islam's outlook on this matter and may well provide the basis for a juridical consensus of our learned scholars to proscribe and denounce the oath-taking at issue.

Taking an oath proper (yamin) is permitted, according to the directive of a hadith, but in the name only of God and His revealed speech, the Quran.

Muslims are also cautioned not to debase God's illustrious name in frivolous oath-taking (Q.2:224). An oath may thus be taken for a valid reason, to show earnestness to observe or avoid a certain conduct in the future, or ascertain the truth of a past event, such as of witnesses before a court.

Oath-taking to divorce one's wife is basically ultra vires, but the jurists admitted it as a form of oath due to its continued practice among Muslims of a pre-Islamic usage that survived the advent of Islam. Muslim jurists consider this, not as yamin proper, but something of compromised validity they named as half.

Yet it became moot whether taking an oath on a contingent divorce was an oath proper, or a suspended divorce (talaq ta'liq). Since the oath in question is not in God's name, it is oath in a figurative sense (majazi) only. Muslim jurists have, however, disagreed over the juridical consequences of such an oath.

The four Sunni schools of Islamic jurisprudence have held that a suspended divorce takes place when its condition materialises, regardless as to whether it was taken by way of an oath, or a suspended divorce for its own sake. This conclusion is based on a hadith simply declaring that "Muslims are bound by their stipulations". A suspended divorce consequently occurs as pronounced in the first place.

The Zahiri and Shia schools have held that a suspended divorce, be it in the form of an oath or otherwise, does not occur ab initio, due mainly to the existence of doubt over its underlying intent: did he actually mean to divorce his wife or merely to show earnestness in respect of another purpose?

Ibn Taymiyyah (d.1328 CE) and his disciple, Ibn Qayyim al-Jawziyyah, have held that if the suspended divorce was taken by way of an oath only, even when its contingent event materialises, divorce does not occur, but the oath-taker is liable to an expiation (kaffarah) that consists of giving charity or fasting. Ibn Qayyim agrees but holds that no expiation is required.

However, if the suspended divorce is pronounced for its own sake, not combining with an oath, then it does take place whenever its contingent event materialises.

The hadith which declares that "divorce is the worst of all permissible things in the eyes of God" implies that all divorce is reprehensible (makruh).

A suspended divorce, when intended, is worse in the sense that it puts the marriage, which the Quran characterises as a solemn covenant (mithaqan ghaliz) in a state of insecurity and suspense (Q.4:21).

Although essentially a civilian contract concluded between two willing parties, marriage in Islam has a devotional (ta'abbudi) aspect that sets it apart from other contracts.

There is disagreement between the Hanafi and Syafii schools over the interpretation of a Quranic verse authorising women who attain intellectual maturity (rushd) to manage their own property transactions (Q:4:6).

The Hanafis drew the conclusion that if an adult woman is authorised to conclude financial contracts, she can, by analogy, also contract herself into marriage without the intervention of a guardian (wali).

The Syafii's retort that marriage is not like other financial contracts as it involves family relations, hence the analogy at issue is discrepant (qiyas ma'al-fariq), which is void, and the presence of wali is a requirement of marriage even of adult women.

These interpretations remain unresolved to this day. A message one can draw from this may be that marriage and divorce should not be mixed up with other transactions, including party-political matters.

A bai'ah fortified by a suspended divorce is also unprecedented in that it consists of an unconditional pledge of loyalty, which the early Muslims took to support the Prophet in the propagation of Islam and counted as an act of merit (Q.48:10).

The Prophet also took bai'ah from women, as the Quran recounts that "they avoid shirk (associating other deities with God), committing theft, adultery, infanticide, slander..." (Q:60:12).

Following the spread of Islam in Arabia and beyond, bai'ah lost its theological application and took a predominantly political character.

In the constitutional theory of caliphate that Muslim jurists subsequently formulated, bai'ah became a requirement of valid election to the caliphal office.

This was not conditional, however, nor has there been any bai'ah in our history to combine with a suspended divorce. A bai'ah in our times is the rough equivalent of a vote. Just as a vote is unconditional, so is the bai'ah.

A vote in a parliamentary or presidential election cannot take a condition to say, for instance, that "I vote for you provided that you do such and such". A condition of this kind would render the election inconclusive. This can also be said of bai'ah.

The alleged bai'ah-cum-suspended divorce that the media has reported of Pas representatives is unprecedented and amounts to a bid'ah (pernicious innovation), which calls for renunciation and avoidance.

The writer is founding chairman and CEO of the International Institute of Advanced Islamic Studies Malaysia.

Mohd Asri @ Abu Talib, 38, who is currently a Universiti Sains Malaysia (USM) lecturer, denied committing the alleged offence in a house in Taman Sri Ukay Ampang, Gombak, between 8.10pm and 9.45pm on Nov 1.

The charge carries a maximum RM3,000 fine or two years jail upon conviction.

Syariah judge Wan Mahyuddin Wan Mohamad granted RM3,000 bail with two sureties and set Jan 5 for a hearing. Asri, who was clad in a black blazer and songkok, posted bail.

When the case commenced at 9.15am in a packed court room, the charge was read out to Asri who said: "I plead not guilty, claim trial."

Selangor Syarie chief prosecutor Abdul Shukor Abdul Hamid applied for the case to be transferred to the Syariah High Court saying that a supporting affidavit was filed on Nov 12, stating the grounds for the transfer.

He said the application for the transfer was made through power vested under the laws to the Syariah chief prosecutor.

He said the case involved application of law and procedures that required views and accurate interpretations by an experienced judge and that the case received wide coverage involving an influential person.

However, Asri's lawyer Kamar Ainiah Kamaruzaman said the accused was only informed in the morning and that they had no opportunity to file a reply.

She also objected to the charge, saying it did not specify or had details for them to prepare a defence.

"It's blur. What is the meaning of teaching aspects related to religion of Islam without 'tauliah'?" she asked.

Another lawyer Jamal Mohd Lokman Sulaiman, who is also representing Asri, argued that the supporting affidavit was filed on Nov 12 when the charge was only presented this morning.

"The fact that the accused is an influential person is irrelevent," he added.

He reasoned that a transfer to the High Court could only be allowed if the prosecution had reasonable grounds.

"Public interest is important and not individual interest," he said, adding that the case should be speeded up as a transfer would cause delays and delays could prejudice the accused.

"The grounds that he is influential is unreasonable for the case to be transferred to the Syariah High Court. The prosecution can have complete trust in this court to handle the case.

"In this court's view, the prosecution must be consistent, not referring to individual involvement. The accused being known to the public will not affect the delivery of justice," he said.

Wan Mahyuddin said hearing of the case in the lower court would also allow the accused to appeal to the Syariah High Court and Syariah Appeal Court.