I finished my MCQ exam....a little bit distressed with the questions.Most of them are on reproductive tumours, not endocine diseases.Hmmm....I've never been good in MCQs anyway :( 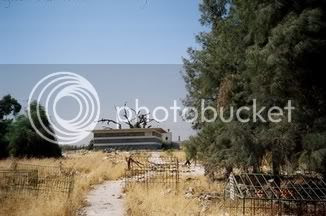 Imam Nawawi's maqbarah in Nawa village.There's a gigantic tree over his grave which eventually keep expanding from day to day.Like his knowledge that expanding and benifiting the Muslims until now, I guess... 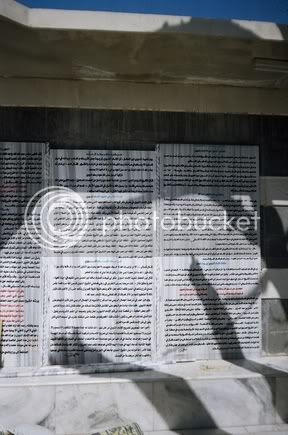 The inscription of Nawawi's life, works and contributions on the wall of the maqbarah

Yahya ibn Sharaf ibn Murri ibn Hassan, Abu Zakariyya Muhyi al-Din al-Nawawi was born in the village of Nawa on the Horan Plain of southern Syria in 631H/1233AD.He was the Imam of the later Syfi'i school, scholar of his time in knowledge,piety and abstinence, a hadith master(hafiz),biographer,lexicologist and Sufi.When he first came to Damascus in 649H, he memorized the text of Abu Ishaq Syirazi's al-Tanbih in four and half months, then a quarter of Syirazi's al-Muhadhdhab (The rarefaction), after which he companied his father on hajj, then visited Madinah and returned to Damascus, where he assidously devoted himself to mastering Islamic sciences.He took Syafi'i Law,hadith,tenets of faith,fundamentals of jurispundence,Arabic and other subjects from more than 22 scholars of the time.They include Abu Ibrahim Ishaq al-Maghribi, Abd Rahman ibn Qudama al-Maqdisi and others, at a period of his life which, as Imam Dhahabi notes,"his dedication to learning, day and night,become proverbial." Spending all his time in either worship or gaining Sacred Knowledge, he took some 12 lessons per day!!!He only dozed off in the night at the moments when sleep overcome him, and drilled himself on lessons he learned by heart while walking along the streets.
Fastidious in detail and deep in understanding of the subjects he mastered,he authored many great works in Syafi'i jurispundence,hadith,history and legal opinion.Among best known are Minhaj Talibin (The seeker's road), which become the main referance in Syafi'i school, Riyadhus Salihin (The garden of the righteous) and Kitab al-Adzkar (The book of rememberance of Allah) and his 18-volume Sharh Sahih Muslim.He lived simply and it is related that his wardrobe consisted of a turban and an ankle-length shirt(thawb)with a single button at the collar.
After residence in Damascus for 27 years, he returned the books he had borrowed from charitable endowments,bade his friends farewell,visited the graves of his sheikhs that had died and departed, going first to Jerusalem and then to his native in Nawa, where he become ill at his father's home.He died after that at the age of 44 years.Young in years but great in benifit to Islam and the Muslims
(Excerpt from the bibliography of Reliance of the Traveller by Sheikh Nuh Ha Mim Keller)
at Thursday, October 07, 2004

Email ThisBlogThis!Share to TwitterShare to FacebookShare to Pinterest
Labels: Travel